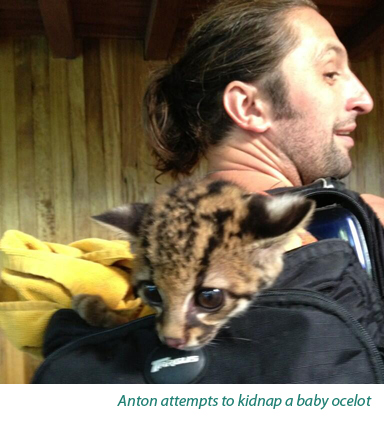 Starbucks is the traveller's choice for coffee. They're everywhere you go and they always have free wifi, so i'm here again, surrounded by other backpackers with laptops out. This time I'm in Miraflores in Lima and I only have two changes of clothes. It's colder than Iquitos and there's a lot less dust and insects; I'm finding it very boring. I arrived two nights ago, was collected at the airport and taken to a hotel room with plastic sheets on the bed. I haven't slept on plastic sheets since I last wet the bed at the age of 26 6. After a brief sleep I was collected the next morning by one of our fixers, Emerson, and taken to the office of Karen, who is in charge of getting our boat to Iquitos.

As you know there are delays. The boat is still in Lima and it should be in Iquitos. The plan was that by now I should have been doing the last bit of work on the boat (about a week's worth of casual tinkering) before Mark's arrival, and we'd then spend some time relaxing and checking and getting everything ready for the 1st of September. It's no longer going to be that easy. I sat there in the meeting with four other people, everyone speaking Spanish except me. Emerson's son is there and he is a large-set man, his voice is raised and he is pointing at me and talking to the shipping agent. I feel my hackles rising and I tell myself that any outburst is not going to help, so I slip into irritated-Anton mode instead and sit there in complete ignorance as they talk about me and my "allergies to food" and "medication". They speak in passionate, aggressive tones and I get more and more annoyed.

After four and a half hours, would you believe that they settle on doing what I suggested in the first instance? I seem to get this a lot (I'm sure everyone does): I suggest something, get told 'no', and then that's exactly what we do anyway, just four hours later. We drive around, collect documents, sign papers, and slowly I'm starting to believe that we might be able to work through this. I should be allowed to see my boat on Monday and you can be sure it will cost me for the pleasure. Then if everything works out it might be ready to move on by the 28th.

We may still not get our boat though; it is all far from sorted out. We have to get past customs now, and after the capture of the two English girls, who did or did not intentionally have a million pounds' worth of cocaine in their luggage, customs are on high alert. As an English person I'm sure I'll now be a target for searches and delays. Then we have to move the boat to Iquitos, either by road and cargo boat, or by air. One is much quicker than the other and much more expensive, but you can imagine which option I prefer.

However even if everything goes according to plan, the chances of starting on the 1st are looking slim. I really think we'll be delayed by a few days, maybe more. The dream of having a fully finished boat has vanished and a new dream of 'just making do' has arrived. To be honest, this excites me more, and if I read between the lines of Mark's correspondence correctly, I think it excites him too. If everything was perfect then it would be boring – amazing, yes, but boring. I'm actually looking forward to having something to work against. I can see myself working on the boat as we start our row and over the first few days, and I can see Mark and I working hard to regain the time that has been stolen from us. I've always said that I think it can be completed in less than a month, but why miss the scenery? Now we might have to prove it, and the best thing is I think we really both want to.