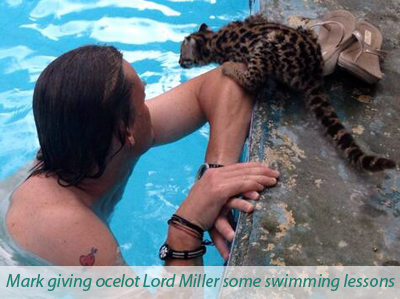 There's no better way to describe the La Casa Fitzcarraldo experience: walking onto the property is to step into a Graham Greene novel. The smell of wood and after-rain greenery, the stone tiles, resident ocelot, and outdoor bar and pool and colonial immigrant proprietor, it all makes sense. The morning light in the lounge is gorgeous, coming as it does through the leafy stuff outside well past the clapboard shutters and right down onto the mahogany and sofa and soda and whiskey and books and nudes and dust and stuff, all cool and colonial and peaceful and radiant and just what our tattered souls need now, and for some time to come.

The backstory to this old-world microcosm is as much a surprise as the place itself. It was here that, in the late 70s and early 80s that a small handful of young and foolhardy filmmakers crafted two Werner Herzog films: Aguirre and Fitzcarraldo, now a cult classic. As befits the shebang, the hotel proprietor, a gentle Swiss immigrant and, as executive producer of Fitzcarraldo, also one of the original handful of visionaries, we were shown the original footage in one of the upstairs rooms, on a large makeshift screen, our only companions a gecko and a bat, both out for the hunt.

This small oasis is the silver lining to a three-week delay in our boat arriving in Iquitos. Anton has had to bear the brunt of Peruvian 'entrepreneurship'. His wonderful blog posts provide plenty of detail on the Charlie Foxtrot that an otherwise simple procedure has become. What his blogs don't quite convey is the enormous stress he's had to shoulder (Anton's put on a brave face, being far more optimistic than I would have been under the circumstances, which is something I greatly admire him for).

Anton's fared impossible requests (e.g. to swap his shorts for the sweatpants of a street vendor, commando-style, only because 'pantalons' were required to witness the inspection of our boat; to be told that foods and meds were never the issue, but that instead it was the set of old tyres we used to safeguard the boat, as these required an import permit; to pay 'taxes' left right and centre for the most spurious of reasons; to be forced to pay storage costs that far exceed what the boat is actually worth and that would easily support a family of eight in Lima for a couple of years; to be told by officials to pretend things didn't happen that, as a matter of fact, very much did, etc.). As I write this, early in the morning, Anton is still asleep. He deserves it. He deserves more than it (the sort of stuff I can't provide - I'll let your imagination run wild). 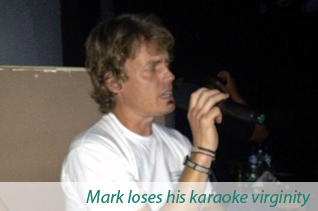 During our private viewing of Fitzcarraldo, we did manage to down two-thirds of a bottle of the most stunning gin - Cambridge Gin, made by our friend and colleague Lucy Lowe, and labelled specifically for our Row the Amazon adventure - before heading out for a night of karaoke. It's all a bit of a blur now but I do believe I actually lost my karaoke virginity that night to John Lennon's 'Imagine'. For good measure, Anton ordered himself a song by The Smiths - which would have been a hoot - but which they never did play.

Anton's about to wake up, it seems, and re-enter a world of silver linings ...