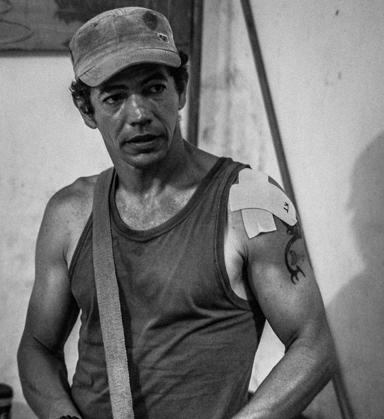 So it's a done deal. Late last night we 'signed up' the third member of our team. Born and raised deep inside the dark heart of Brazil's jungle, Murilo is as tough as they come. At 5'10" he isn't massively tall. Nor is he particularly big. But he's the real deal: mentally tough, muscular (in a stringy, understated sort of way), hugely experienced, and Zen-like - not easily fussed or disturbed, unafraid, his threshold for pain several standard deviations above ours. His luggage consists of no more than two t-shirts and a pair of shorts - and a cooler with medicinal drinks. Why the additional complexity? Surely, more choice (of clothing, food, entertainment) isn't necessarily better, despite what popular media may have us believe, for with choice comes anxiety and with anxiety comes exhaustion.

When detailing the contents of our boat, he seemed bemused by our expedition grade food and electrolyte drinks. Our original plan - to steer clear of rowing at night - is changing too: given that we need to cover so much ground in so little time, we will row 24/7 (which we'd steered clear of for fear of midnight muggings).

In truth, the absence of any fear on his part is so very refreshing after months of accounts - some first hand - of river muggings and beatings and murders, sometimes for no reason than locals having been given leave to. For example, just two days ago, an American expat told us of his neighbours having recently been murdered on the river. A few years ago, two Japanese rafters were robbed and killed by the army, their bodies chopped up and flung into the river, and the culprits not found until their sat phone appeared on a local market. In 2011, two Europeans were killed attempting the same. All this is part of the public record.

Less seriously, an adventurer living in Iquitos set off to kayak the Amazon, got mugged three times before the Brazilian border, and decided to throw in his hat. There are plenty stories like this and, frankly, they are becoming tiring. Fear paralyzes. It is a formidable tool (think of how politicians have used it to justify recent wars, occasionally under the guise of 'pre-emptive strikes' or WMDs), and wears one down pretty quickly. But as with most emotions, one cannot sustain it for long before collapsing morally under its weight. Thus, Murilo's lack of it comes as a breath of fresh air.

Damn the pirates: this is our boat and our journey and our story, and to hell with the rest. We're here to enjoy this, to learn from the experience, and to forever purge our tattered souls. The trip will be a baptism of sorts but one that has nothing to do whatsoever with religion (which, as far as Anton and I are concerned, can go to hell too). We're angry young men - and surprisingly similar in so many ways - but keen to better ourselves and those we come in touch with.

Murilo will write his own blogs. You'll note that he has a passion for protecting the jungle - one that is rapidly being eroded by loggers (often with the blessings of local politicians), and stripped of any wildlife by hunters. His own project involves 6000 hectares of Peruvian rainforest, 400 kilometres into the jungle, there to help preserve all that's beautiful and endangered. It's taken him three years so far to get illegal hunters and loggers off his property, using merely his intellect.

Over to you, Murilo