Living on a boat smaller than a council house kitchen 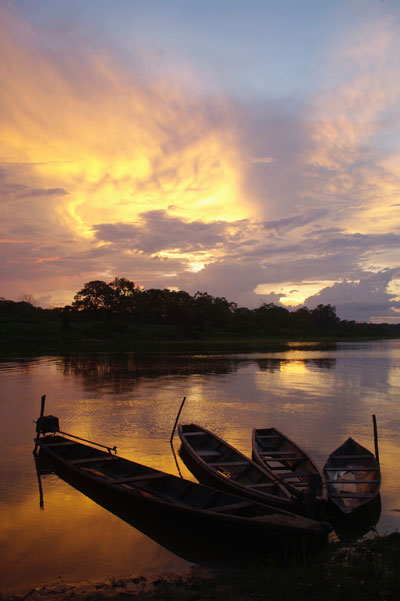 Well we arrived at the border in the same fashion that we set off. Our boat has had some major repairs on it and even after the processional repair job that Murilo and I have done on the boat it still lets water in. I can imagine all the boatmen of Cambridge sitting drinking coffee right now joking about this very fact and guys - Pete, Ian, Kev and everyone else from the river - yes it was of course bound to leak if I did it.

As we neared the border we all felt an amazing sense of relief. Our very expensive yet completely useless GPS maps and system kept promising the next bend would be ours and yet each one showed just more and more water, islands and riverbank. As night set in we realised that it was not going to be as easy as we first thought. In the dark we could finally see first the lights of Santa Rosa, the frontier town in Peru, then further in the distance the lights of Leticia and Tabatina. Bliss, surely not long now. As I looked over my shoulder from the rowing seat and I could see the faintest of lights, I thought 'What! How far away?' This was really starting to become a bit ridiculous, seats swapped, heads down we rowed on.

Honesty time, I'm quite a complex person emotionally, I like to think I'm very positive and upbeat but to be fair most of it is an act, my aim being to motivate the people around me so that I can be made to feel better myself. This isn't the conclusion of trained professionals this is just the musings of someone that is trying to understand himself. Also as I get more and more stressed I reach a tipping point which results in a negative outcome. I don't as much release all of my worries but I lose the positive nature and then this bad mood, grumpy mood arrives and I can't shake it.

During the day the team was starting to feel the strain. Mark is desperately missing his family and especially his girls, Murilo has a business that he needs to maintain and after dropping everything in the hands of his extremely supportive partner Deborah he still needs to support her and help with enquiries. I have my stresses as well; I'm also missing home life and I've lost a lot of connection to this on the dreaded Friday the 13th (blog to follow). I also worry about the attempt and if we will be successful. Slowly tensions rose and rose and my positive nature turned to grumpy boatman. Simple comments and questions started to feel like accusations and criticisms, and I was finding faults in people where in reality there were much greater gains by their positive points. As I overanalysed the day I found another leak in the boat, this time from the keel that was damaged in transit. It is slowly flooding the stern section where we have stored extra provisions for the trip. Every day I check an area of the boat, rearrange, tidy and keep myself busy. It's a small issue when you consider the fact that we have to bail the boat out every 20 mins or so because of the hole in the hull, but it's another straw on the camel's back.

On top of this earlier there had been a discussion about watching our route and staying in the stream. This is the stressor that pushes Murilo's button, and as he spoke I felt accused and irritated as I felt I had done a good job in the night. It was these two factors and the fact that as I bailed out the cabin we hit a sandbank square on, beaching the boat, that really tipped me over. Imagine the words in my head, the sarcastic comments that danced on the tip of my tongue just waiting for the excuse to be said. But no, I managed to keep it all in, and after freeing ourselves, pushing away and managing to hit it again, finding we had gone the wrong way and then hitting it one more time before finding the right route I was still managing to keep calm (well as calm as a sack of cats). The row down the channel to Leticia was the longest ever, my mood was set in and as people tried to lighten it my determination to be annoyed increased, the blind leading the blind.

In fairness we had gone the right way; the river changes though and the channel that was once open was now closed, and it's not as though Murilo comes here every day (his Brazilian bank account has been closed as he hadn't used it for three years). It was just a build-up of tension that occurs under stressful situations. As we arrived at a boatyard at about midnight we had it out. We all had points to raise and all had issues, we had just spent the last four days on a boat together smaller than a council house kitchen, working non-stop between us and bearing sun and heat and rain and in my case Murilo's crazy world music that all sounds the same, utter rubbish.

I'm also sure it's not the end of it as we still have things to clear up and clarify, but what I do know is that as we sat or lay on the pavement in Columbia at midnight eating the most amazing burgers (x2) that I had ever tasted and a cold Coke, I knew I was with real friends and people that I could trust.

These two guys have each pulled me through to this point along with lots of others that support from afar. I'm also sure there are much worse problems to come, for example I am writing this outside the closed immigration office in Peru with no wallet after dropping the keys to the boat into the Amazon (we found them, don't worry) but all of that is to come and right now I don't want to be here with anyone else other than a crazy Dutchman and a Brazilian environmentalist with views that I can actually listen to without feeling like I'm being converted into a vegetarian.